What is Low-Code Development?

Low-code development offers software developers a shortcut to create something new and beneficial for their organisation. Rather than having to think about every single line of code, as a developer you can take advantage of Kianda’s Developer section to create your own custom widgets from predefined field, rule and dashboard code.

You can also quickly use Kianda Developer to add webhooks, providing an efficient way to push GET requests to other applications in real-time as the Kianda process runs and avoiding the need to poll for data.

Kianda uses EmberJS to build widgets, and in particular the Handlebars templating library, to power the application’s user interface. See templating basics to get started.

With Handlebars you can quickly build web applications that are made up of different components. Handlebar templates contain static HTML and dynamic content inside Handlebars expressions, which are summoned with double curly braces: {{ }}

Dynamic content inside a Handlebars expression is rendered with data-binding. This means if you update a property, your usage of that property in a template will be automatically updated to the latest value.

Statements like if and unless are implemented as built-in helpers. Helpers can be invoked three ways; inline invocation, nested invocation and block invocation. For more details, go to: https://guides.emberjs.com/v2.18.0/templates/conditionals/.

How to get started as a Kianda low-code developer

Kianda Developer is a user-friendly interface that allows you to create custom widgets in a few minutes. A custom widget could be a ‘Field’, ‘Rule’ or ‘Dashboard widget’. This video goes through an example of how to create a custom field widget.

When you create a custom field widget, the Widget UI and Widget Code tabs are displayed. These two screenshots show the default code for ‘Widget UI’ and ‘Widget Code’.

The ‘Widget UI’ defines the HTML, handlers, expressions and more.

The ‘Widget Code’ defines the logic and functions.

Custom field widgets you create will be available for use in Kianda Designer by going to Side menu > Administration > Designer > click on an existing process or Add new to add a new process (then click on a form to edit it), and see the Custom fields added under Controls. 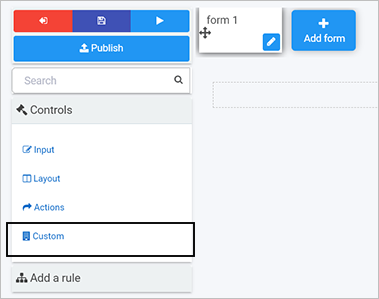 When you create a custom rule widget, the Widget UI and Widget Code tabs are displayed. These two screenshots show the default code for ‘Widget UI’ and ‘Widget Code’. The ‘Widget UI’ defines the HTML, handlers, expressions and values for rules.

The ‘Widget Code’ defines the logic, functions and variable routines.

When you create a custom dashboard widget, the Widget UI and Widget Code tabs are displayed. These two screenshots show the default code for ‘Widget UI’ and ‘Widget Code’.

The ‘Widget UI’ defines the widget configuration view, used for editing and the widget runtime view, or view mode.

If you want to use Kianda for no-code development, follow these simple steps:

Design and build your process