When working with rules in forms, a key principle to consider is rule order. Rule order is important if there are multiple rules attached to an item like a button or form field to determine the sequence of rule execution. As a form designer, you can change the order of execution to suit your specific process design.

Remember you can assign rules at:

Rules are typically synchronously executed in Kianda, so for example when using a Start a process rule, when the rule is executed first any mappings from a secondary/target process are mapped into a primary process, and from there if there are any rules to trigger on the secondary/target process those are executed, but a rule will only execute when the previous rule has completed. This is different to asynchronous execution where the system will execute rules without waiting for the previous rule execution to finish. Within time defined rules, like Start a process and Schedule a rule there is an option to choose between synchronous/in-series or asynchronous/in-parallel where the latter may be useful for rules without dependency.

For example, you may want a process to send automated emails to a safety manager, where the email includes submitted form data. In this case a Send email rule could be attached to a form Submit button so an email is sent once the button is clicked. This will result in an automated email to a designated person. To generate a report of the completed form, you can use the Generate word document rule triggered again when the Submit button is clicked. In this example the Generate word document rule has to be executed before the Send email rule, so that the Word document can be generated and then attached to the email.

The rule order consideration is therefore particularly important when rules are dependent on each other - where the output of one rule is the input of another rule.

To change rule order, when the rule is created: 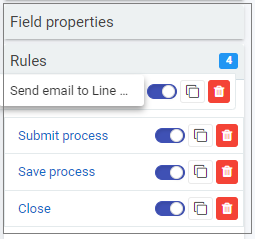 The video below shows an example of a Send email rule being created and saved. The rule is attached to the Submit button. Once the rule is created, by default the new rule goes to the bottom of the list of rules. To move the rule, simply click on it and drag it to where you wish to place it. In this example we want the email sent before any of the shutdown processes like Submit or Save, but after a Generate Inspection rule, so the output from that rule can be used in the Send email rule.

To find out more about rule implementation, go to the main Rules page and then click on the links to the different rule categories.